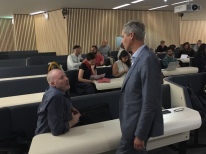 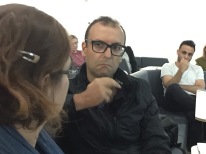 From Thursday 8th September until Saturday 10th September 2016 mima hosted the ‘Working with Constituents’ event. This conference, developed by Elinor Morgan and the editorial team of the forthcoming L’Internationale publication ‘The Constituent Museum’ invited speakers and contributors including Anthony Gardner, Jesús Carrillo Castillo, Archivos en Uso, Alina Müller (The Silent University), Kristine Khouri,  Nikos Papastergiadis, Bini Araia, Céline Condorelli, Igor Španjol, pantxo ramas, Daniela Ortiz  and Burak Arıkan ( Graph Commons) to think around and further discuss the idea, concept and usefulness of the term ‘Constituencies’. The event itself intended to address the key question ‘What would happen if museums put relationships at the centre of their operations?’. However, the incredible discussions then ensued began to make us think that perhaps the title of the event should have been ‘Becoming Constituent’ rather than ‘Working with Constituencies’. After all, the premise of the event was to ask ‘What would happen if museums put relationships at the centre of their work?’ and to ‘explore the possibility of a museum in which the visitor is not a passive receiver of predefined content, but a member of a constituent body, who provokes, informs and co-produces programmes’. This, of course, was made particularly pertinent in the light of mima’s recent mission statement which is as follows:

‘Middlesbrough Institute of Modern Art, part of Teesside University, is moving forward with a vision of itself as a “useful museum,” or “museum 3.0,” under the directorship of Alistair Hudson and with programming by Miguel Amado and Elinor Morgan. The “useful museum” is a civic institution that promotes art as a tool for social change and is created by the sum of the actions of its users. The “museum 3.0″ establishes the gallery as a public site, beyond representation and participation and based on use value, with its meaning defined by its constituents’.